Currency design is a powerful tool with which to define a geographical space and the political identity of those who reside therein. That it fails ‘to attract the view of those that handle it is…a token of its power’ (Pointon 1998, 229). By focusing on British banknote design, we can identify two major reasons why it is significant. Currency design plays an important role in constructing national narratives and inspiring an identity of ‘Britishness’. The narrative portrayed is of a ‘Great’ Britain which has not only been a significant influence upon world history but continues to lay a rightful claim to the status of a superpower. Encouraging and instilling a sense of national pride, symbolism of this kind helps foster a unity across the diverse British population under a specific ‘brand’ of Britishness centered upon national heroes, entrenching what Benedict Anderson (1991) describes as ‘imagined communities’.

Banknote design gives the Bank of England, as Mervin King, a former governor, has acknowledged, a ‘rare opportunity to promote awareness of our nation’s history and acknowledge the life and work of great Britons’. Currency reflects how a nation views itself, or should view itself, in its relations to the world. The recently redesigned five-pound note is illustrative of the narratives that currency can portray and the identities they arguably inspire. While there is much fascination around the latest security features of any note, it is the `political features` which constitutes their most important role.

Currency design and its impact on nationalism has been described as a link ‘remarkably understudied in contemporary academic literature’.  But policymakers engaged in nation-building during the 19th and 20th centuries certainly recognised the power latent in currency design; even before the age of nationalism, rulers sought to ‘advertise their power’ by placing images of themselves on currency. This was an era where governments launched ‘extensive initiatives’ to instill within their subjects a ‘collective identity centered around nationalist images of a common past and culture’ as Eric Helleiner, a foremost scholar in the area, has remarked. This effort was aided by technological advances in printing which revolutionized the quality of, and detail upon, British banknotes.

First introduced in 1793, it was colloquially known as the ‘white fiver’. The allegorical Britannia has been a crucial figure on this denomination for the past 224 years. 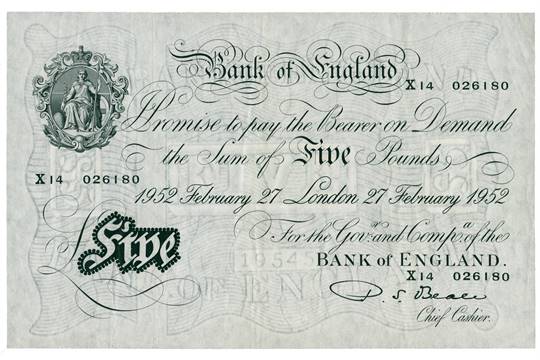 In 1971, the five-pound note depicted Arthur Wellesley (1st Duke of Wellington) who defeated Napoleon in the 1815 Battle of Waterloo. The scenery commemorates the Battle of Salamanca (1812) where Spain, Portugal, and the UK defeated France in the Peninsular War. A physically formidable Wellesley confidently wears his military honours. Britannia’s seal is accompanied by Nike, the Greek goddess of victory.

These messages seek to inspire citizens and base their identity around these supposedly glorious figures with timeless relevance.

The latest iteration of the banknote displays a confident, serious Churchill in traditional English dress whilst Parliament glistens behind him. Elizabeth Tower points at 3pm, the approximate time that Churchill delivered the featured quote in 1940: ‘I have nothing to offer but blood, toil, tears and sweat’. Furthermore, a note above the depiction of Parliament reads: ‘1953 Nobel Prize in Literature…awarded to Winston Churchill for his master in historical and biographical description as well as for brilliant oratory in defending exalted human values’.

Figure 2: The new British five-pound note as of late 2016

A simple analysis of the five-pound note can draw out themes of mythology, military might, war, leadership, national confidence, struggle, and sacrifice. These messages seek to inspire citizens and base their identity around these supposedly glorious figures with timeless relevance. Pertinently, the U.S. Treasury’s chief clerk wrote in 1863 regarding banknotes: ‘They would tend to teach the masses the prominent periods in our country’s history. The laboring man … would soon inquire …and in time many would be taught leading incidents in our country’s history, so that they would soon be familiar to those who would never read them in books, teaching them history and imbuing them with a National feeling.’ (letter from S. M. Clark to Secretary Chase, March 28, 1863). Currency is significant in that it reaches even the most marginal members of society and the subconscious minds of children who are most fascinated with its novelty.

Priyesh read PPE at the University of Warwick. He also completed a Graduate Diploma in Sanskrit and Hindu Studies from Shree Somnath University in India before beginning his MSc at UCL in Social and Cultural Anthropology.

Workplaces all around the UK take part in an event every year. They pick out of a hat a slip of paper and will…

Thank you for subscribing.

We respect your privacy and take protecting it seriously

We use cookies to ensure that we give you the best experience on our website. If you continue to use this site we will assume that you are happy with it.Ok